The Crown of Charlemagne

The Holy Diamond had many inspirations, and one of them is the Crown of the Holy Roman Empire.  In my travels across Europe I have seen many crowns great and small.  There are the crowns in the Tower of London bereft of their jewels, which had been sold to pay for the Hundred Years War (which the Simpsons called Operation Speedy Resolution…).  The crowns of the Kings of France are in the Louvre in Paris.  One can see various versions of the Swedish, Danish, Norwegian, Hungarian, and other crowns in their respective capitals.  Most are more similar rather than less.

Most crowns are, of course, circular.  There is nothing within the circle (as viewed from above) or they form a sort of cone.  They have a lot of jewels but no images or words.

The Crown of the Holy Roman Empire, however, is quite different.  Words and phrases run throughout it, either written in pearls or on the plates of the various biblical images.  It’s a folding crown: the Ikea version of a crown if there ever was one. 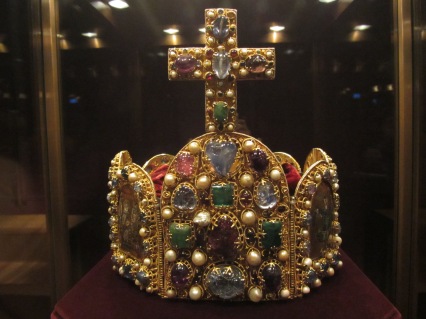 Front view of the Imperial Crown of the Holy Roman Empire. In The Holy Diamond, the holy diamond relic was said to have been set vertically on the crown’s cross. (Photo: LH Dooley)

It looks a bit sloppily assembled.  The images are medieval, meaning that they are disproportioned.  The jewels are rough, unshaped, and asymmetrical.  Its dimensions are inharmonious.  It appears heavily vertical which conflicts with its lack of horizontal lines.

But all of these give it its unique look – and must be excused given its age; it was crafted between 980 and 1015 AD. 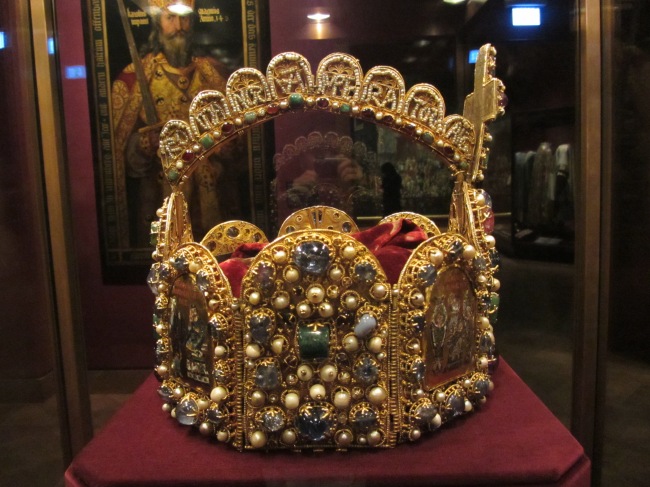 Side view of the crown. Note the hoop that connects the front and rear of the crown. The crown can be unlatched and folded flat for transportation. (Photo: LH Dooley)

In The Holy Diamond, the crown plays an important role as one of the holding devices of the holy relic, as being part of the history of the Germanic lands, and for being one of the recurring clues as to the diamond’s origins and its present whereabouts.

The Holy Diamond is fiction – but inspired in part by the true story – and loss – of the Imperial Crown of the Holy Roman Empire. After World War II, the Nazis hid the crown from the Allies, and for several weeks a US Army investigative team drove around Germany searching for it. This story is told in the book Hitler’s Relics: A True Story of Nazi Plunder and the Race to Recover the Crown Jewels of the Holy Roman Empire. You can find it here:

Today, the original crown of Charlemagne can be seen in the Treasury of the Hofburg Museum-Palace in Vienna, Austria.  Indeed, in this very room, The Holy Diamond characters of Franz and friends pursue their quest to solve the historical mystery that drives them from hostel to hostel. 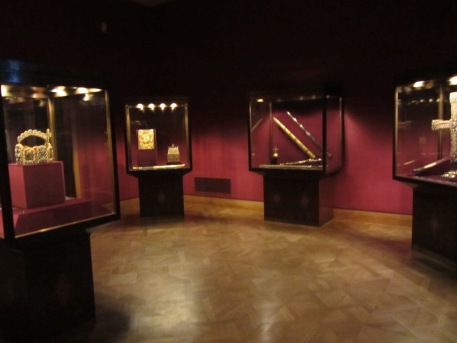 The room in the Imperial Treasury in the Hofburg Palace containing the Crown of the Holy Roman Empire (left). This room also has a large piece of the True Cross, the Holy Lance, and the Imperial sword and orb. (Photo: LH Dooley)

Liam H. Dooley is an Irish-American author living in Asia and Europe. He has a passion for history and traveling. Most of his time is spent touring the world, visiting museums, iconic buildings, monuments, and grand squares in search of knowledge and inspiration. As a child and university student he played the cello while studying international relations, and when he is not researching and writing novels or planning trips he immerses himself in current events and international affairs. You may learn more about Liam H. Dooley at his official web site: www.liamhdooley.com
View all posts by Liam H Dooley →
This entry was posted in Uncategorized and tagged Charlemagne, Crown, Hofburg, Holy Roman Empire, Karl der Grosse, Vienna. Bookmark the permalink.