About The Holy Diamond 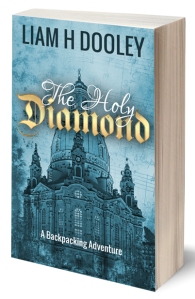 The Holy Diamond is a novel about a lot of things: backpacking through Europe but particularly Germany, Austria, Switzerland, and other German-speaking countries; the annual Eurovision song contest; the history (or some of it) of Western music with a focus on the great Germanic composers such as Mozart, Beethoven, Wagner; A bit about the Beatles; and to top it all off, an off-shoot of the Teutonic Knights.

This novel has, in addition to the above: neo-Nazism, Islamic terrorism, European policing, museums, couchsurfing, German history from the Holy Roman Empire of Charlemagne to Hitler and the Nazis such as Himmler and Goering, to the present and even a dash of European royalty and the bizarre hereditary ties between modern-day monarchs.

This is the “Official” Introduction that will be on the back cover of the novel:

A secret religious order is out to re-establish and dominate a Christian Europe.

An ancient diamond is their key to victory.

Only a group of backpackers can stop them.

History doctoral student Franz Huber witnesses the murder of his girlfriend by a mysterious band of killers. With her last breath, she reveals they were after a diamond with connections to Christ himself.

Franz traces the legacy of the Holy Diamond as it passed from composer to composer, musician to musician, throughout history, searching for clues to the whereabouts of the jewel.

But at every turn he is outpaced by the killers: the Teutonic Knights of the Aryan Order. Only friends, quick wits and luck will help Franz prevail in the race to find the Holy Diamond – a race for the fate of Europe.