Hamburg: Writing of the Reeperbahn

When you write a novel, ideally you will write about a place that you know, or at least have been to. Indeed, most authors seem to write their first book or novelette, published or not, about their hometown or home area – unless it’s fantasy or science fiction.  There is no doubt that, all else being equal, a writer will write more convincingly about a place they have been to than one they have not. The Holy Diamond has one chapter about Hamburg – but when I had written the first draft, I had not actually been to the city! 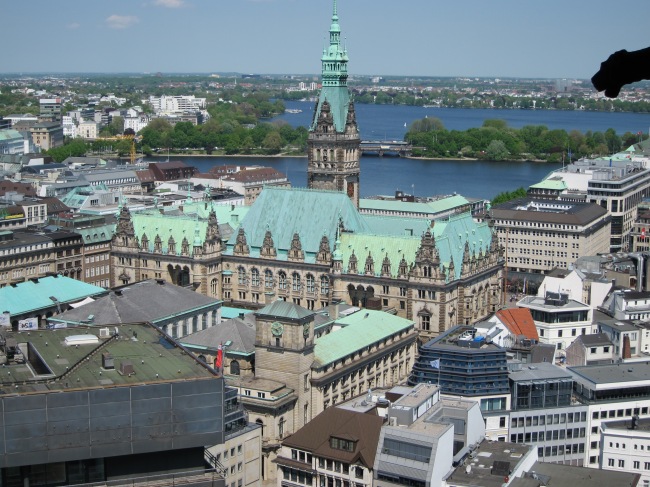 View of the Hamburg city hall and the Alster Lakes from the ruined Saint Nicholas church tower. (Photo: LH Dooley)

I won’t go into the tedious details of how I compensated for this lack of experience, but I will say that compared to writing about places I had been to: Vienna, Salzburg, Frankfurt-am-Main, Luzern, and most of the other locations where the novel takes place – writing about Hamburg – even the small area where the chapter takes place – was a challenge.

A few months after finishing the first draft of the novel, however, I made my way to Hamburg. First surprise: one of the locations that I had included in the story was closed! But otherwise, the city was quite enjoyable.

Highlights included going up the church ruins of Saint Nicholas Church by elevator for a scenic view of the city; a walk along the harbor waterfront; and a boat ride on the two Alster Lakes in the middle of the city. However, the principle area of interest from a novel perspective was a street and neighborhood called the Reeperbahn.

The Reeperbahn has, or had, a “seedy” reputation. A place where tourists went for an epic night out, sailors stopped by at night to recover their land legs, and every cutthroat and sell-sword might go to engage in every debauchery and swashbucklery this side of the Atlantic. 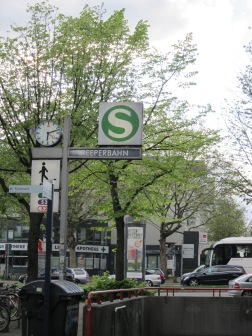 Today, however, it is a potpourri of everything and anything: KFC, McDonalds, steak restaurants, hostels, hotels, clothing stores, souvenir shops, strip clubs, and a few red light streets or buildings. It’s the old and new (pre and post-Giuliani) Times Square all rolled into one. It is the old Reeperbahn which probably gave the district the best and worst of its reputation. Today it is where everyone goes in the evening: students, tourists, locals, businessmen…everyone who is anyone! It’s the city centre not in the centre.

The Holy Diamond has only one chapter devoted to this part of the former Hanseatic city (Hamburg having been a major city of the Hanseatic League). But it is a key chapter, focusing on the Beetlemania museum.

It was only by good luck that, when conceiving the location for this part of the book that involved the Beetles, that I learned that they had actually begun their historic career in Hamburg. Originally, I had planned for this part of the novel to take place in England – specifically Liverpool – but I had struggled with two problems about this. First, getting the characters there; and second, it would be rather far afield from the German-speaking countries in which most of the novel takes place (except for the start of the novel in Vatican City, and a brief return to Italy in the middle of the novel). 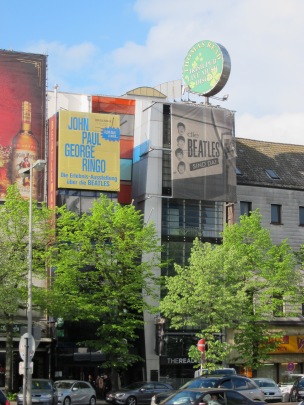 Beatle memories! The old Beatlemania museum, now closed, and a sign for the Beatles-Platz a few meters away. (Photo: LH Dooley)

So it worked out well that I could keep the novel in Germany, while also integrating The Beetles.  Moreover, to my surprise and good luck a second time around, I discovered there was a Beetles museum called Beetlemania right in the middle of the Reeperbahn!

Thus developed my chapter, and it was only during my visit after I had finished the first draft of the novel that I discovered the museum was closed! However, it was both too late to change the novel and, after all, it’s a work of fiction and who knows…maybe it will be back, thanks to the success of The Holy Diamond!

Liam H. Dooley is an Irish-American author living in Asia and Europe. He has a passion for history and traveling. Most of his time is spent touring the world, visiting museums, iconic buildings, monuments, and grand squares in search of knowledge and inspiration. As a child and university student he played the cello while studying international relations, and when he is not researching and writing novels or planning trips he immerses himself in current events and international affairs. You may learn more about Liam H. Dooley at his official web site: www.liamhdooley.com
View all posts by Liam H Dooley →
This entry was posted in Uncategorized and tagged Beatlemania, Beatles, Hamburg, Reeperbahn. Bookmark the permalink.