Salzburg: The City of Mozart

If Salzburg was ever to be renamed – after all I think the salt (Salz in Germanic) mines are not so relevant these days – it could be called Mozartburg.  Or, if you are nuts about Richard Rogers and Oscar Hammerstein II, you could call it Sound of Musicburg.  But for some reason this name seems a bit long and clunky.

The snow falls on Salzburg! This is the more historic centre on the other side of the river, with the castle on the hill. The Mozart Birth House museum is between the river and the fortress. (Photo: LH Dooley)

But we will agree that Salzburg is Salzburg, and a good enough name for the time being, and move on to what an amazing city it is by whatever name it might go by.  For many people their first – and maybe their sole – exposure to the city is through the Hollywood 1965 film, The Sound of Music, starring Julie Andrews.  The film, which won four Academy Awards, depicts many of the city’s feature attractions masterfully: the white-washed Hohensalzburg fortress on its hill overlooking the Baroque city, the Salzach River that divides the city into two, the Baroque churches and monasteries, and surrounding Alps. 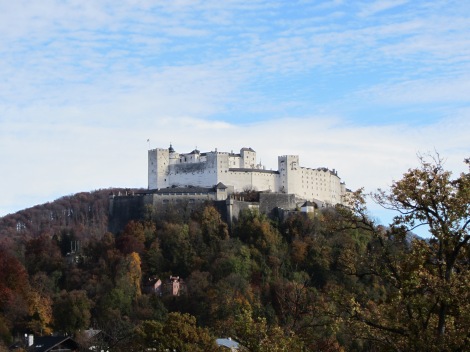 In The Holy Diamond, the Teutonic Knights of the Aryan Order find their first major clue to the diamond’s existence and whereabouts in Salzburg, and they also commit their second major crime within the novel’s chronology.  We will revisit this crime later…so stay tuned.  But suffice it to say, they set up a safehouse in a quiet section of the city center.  More on this neighborhood below.

I have been to Salzburg twice; and when I developed the myth of the Holy Diamond, it was hard NOT to incorporate the city of Mozart.  Wolfgang Amadeus is so imprinted into the city’s character, he himself is such an icon of pre-modern music, and the city’s beauty and architectural perfection so pure that Salzburg was the perfect place to incorporate.  Indeed, in earlier versions of the novel the city plays a slightly more prominent role, particularly the incorporation of a small chapel and burial chamber cut into the hillside above Petersfriedhof cemetery and below Hohensalzburg fortress.  But length-limits are any novel’s cruel master.

I have been in Salzburg in both a warm, flowery May and a chilly, snow-covered January.  Both have their charms.  When the sun shines on the fortress, its walls are as white as the snow-capped Alps that surround the city.  Flowers bloom from windowsills and the city’s fountains burst with the musical song of spouting water.  In the winter, the white snow coats the cobblestone streets and sits upon the dark, faded gravestones.  During my winter visit the funicular was out of order, so I had to make a slippery ascent and an even slipperier descent along the winding roadway up to the castle.

View of Salzburg from the fortress. The Steingasse neighborhood is between the river and the hill. (Photo: LH Dooley)

One of the quarters that is lesser visited and a bit out of the way from the touristic areas – that is the neighborhood of the Salzburg Cathedral and the neighborhood across the river around the Mozart “living” house – is the Steingasse neighborhood, largely defined by the Steingasse street.  Its narrow, winding streets without shops, restaurants, cafes, or other visitor draws is an oasis of solitude in the otherwise crowded city center.  Footsteps quietly echo against plastered but largely undecorated apartment building walls.  Old ladies small dogs pass by.  The clean police frequent the street less often, resulting in graffiti remaining for longer than the night or two that it might endure in the touristic areas.  It is a whole new city just a dozen meters from the main tourist circuit and well worth the detour.  It is in this area where the Teutonic Knights of the Aryan Order have their safehouse and where they make a key discovery about the diamond’s history.

Liam H. Dooley is an Irish-American author living in Asia and Europe. He has a passion for history and traveling. Most of his time is spent touring the world, visiting museums, iconic buildings, monuments, and grand squares in search of knowledge and inspiration. As a child and university student he played the cello while studying international relations, and when he is not researching and writing novels or planning trips he immerses himself in current events and international affairs. You may learn more about Liam H. Dooley at his official web site: www.liamhdooley.com
View all posts by Liam H Dooley →
This entry was posted in Uncategorized and tagged Austria, Hohensalzburg, Mozart, Salzburg. Bookmark the permalink.