So the Liam Blog and The Holy Diamond have been on a bit of a vacation for some months, mostly working on new creative writing efforts and traveling.  News on new writing projects will come soon, but in the meantime here are a few photos of The Holy Diamond‘s latest travels to Washington, D.C., USA.  No White House photos due to security reasons. 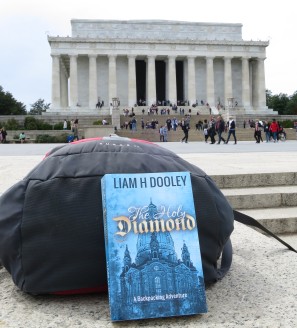 I won’t waste too much space with thoughts about this city… it is pretty much over-covered in film, television, news, and history books.  It is NOT, I would say, well covered in literature classics or novels.  At least not ones that I know.  Of course, there are probably hundreds of novels that have involved the city – its espionage, its intrigues, and its politics.  But not any great classics come to mind.  There is no Hunchback of the Washington Monument, or FBI Agent Sherlock Holmes.  A recent, reportedly mediocre novel (that I did not read) is Dan Brown’s The Lost Symbol.  From what I can gather it is basically one of the four or five stories of the same theme: running around looking for some clues to evade death, all within about 24 hours.

I had once considered writing a novel that took place in this city – more along the lines of Les Miserables than House of Cards.  But in the end, I stuck with my preference for stories that take place in Europe, and that is what we have to date. 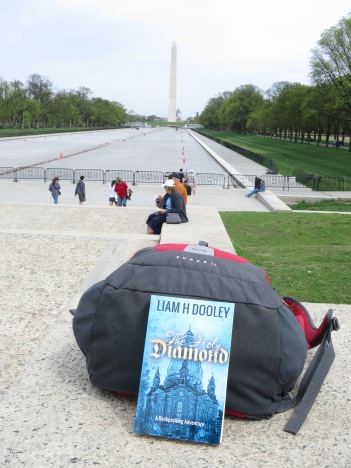 The Reflecting Pool, with no water and no reflection

My Quick Opinion of Washington, DC

One can and one does spill ink daily about this city – just pick up the Washington Post.  My view is that this city is rather more stagnant than Paris or London, but it has some nice museums and sites to visit – for free!  My favorites include the Smithsonian Air & Space Museum, the Lincoln and Roosevelt Memorials, and the National Archives.  In the latter one can see the faded, beat-up copies of the original Declaration of Independence and Constitution, as well as a rotating display of other great, historical documents.

One will most likely see many of the symbols of the city’s political elite: motorcades, Presidential helicopters, press pools set up somewhere, and of course the dozens of massive, classical government buildings.  Most of these, however, are not open to the public – especially the White House.  It’s too bad, because it makes my photo of The Holy Diamond on the President’s desk in the Oval Office a bit tricky to take.

Cherry Blossoms, Tidal Basin with the Washington Monument in the background.

Liam H. Dooley is an Irish-American author living in Asia and Europe. He has a passion for history and traveling. Most of his time is spent touring the world, visiting museums, iconic buildings, monuments, and grand squares in search of knowledge and inspiration. As a child and university student he played the cello while studying international relations, and when he is not researching and writing novels or planning trips he immerses himself in current events and international affairs. You may learn more about Liam H. Dooley at his official web site: www.liamhdooley.com
View all posts by Liam H Dooley →
This entry was posted in Uncategorized and tagged Lincoln Memorial, Reflecting Pool, Washington DC. Bookmark the permalink.