How I Stopped Dreaming and Finally Wrote a Novel

How Long Did it Take to Write The Holy Diamond?

I’m Done, but Where Did I Begin?

But how long did it take The Holy Diamond to be written?  For aspiring and current writers, it’s an interesting subject that I’ll relate in some detail.

The original idea came at five o’clock in the morning in Washington, DC area when I woke up sneezing from allergies in the basement guest room of my friends’.  With each sneeze I saw stars and fumbled in the search for my inhaler, all the while thinking about how to write a story involving a diamond and music.  It was a question I had been grappling with for a few weeks for a number of undisclosed reasons.

Minutes later, I came up with the idea of writing a short story in a sort of non-fiction style about the history of a diamond that imparted mystical, musical skills. It’s origins were to be uncertain: a meteorite that had crashed in the Oracle of Delphi in Greece, discovered beneath the ground at some other historical site such as Stonehenge, etc. And it was only supposed to be a five to ten page short story. 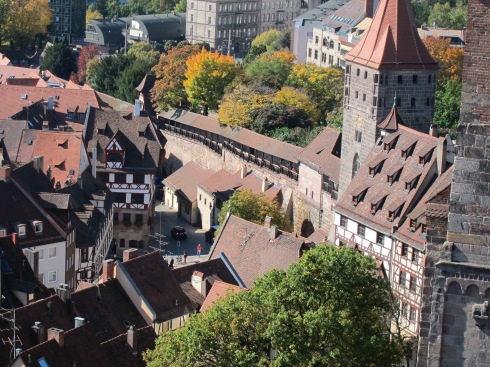 Part of the Nuremberg city wall, looking down from the Kaiserberg. My visit to Nuremberg was a key inspiration to writing The Holy Diamond, where much of the story takes place. (Photo: LH Dooley)

Unfortunately, the story in a sort of creative, non-fiction format, starting from antiquity to present day, could not be done in ten pages. Or twenty. Or fifty.  At page 75 or so (Microsoft Word single space), where the story had gotten to a love triangle between Johann Strauss, Jr., Austro-Hungarian Emperor Franz-Josef, and Empress Elisabeth (or Sissi), I realized – my short story was not short, and wasn’t getting any shorter.

And then I began my first (and only) creative writing course in Malmö University, Sweden, where I learned the key elements of creative writing and fictional writing: character, plot, setting, dialogue, and language. One important thing we learned was that it is harder to write less than more.  The course went from August 2011 to January 2012.

During that time, I came up with the idea of making a proper novel out of my fictional non-fiction history.  I had a concept and a chronology, but I needed a story and characters.  Throughout August to December I worked hard on the plot and characters, with a final “sprint” of outlining the story during Christmas vacation 2011.  Then on 24 December 2011, I started the novel.  In a hole there lived a hobbit… or something like that.

As I finished my creative writing course, I shifted my time into writing the novel.  And wrote and wrote… Sometimes even writing from places where the novel took place (like Vienna and Salzburg); or going to places where I knew a part of the novel would take place (such as Jönköping, Sweden).

In early October 2012, I finished a first rough draft that I sent to friends.  Several intelligent and generous friends read it, provided feedback, and by 22 December 2012, almost a year to the day of the first words that began with “Chapter 1”, a much better, second draft was done.

After making weak attempts to find a literary agent, I decided to go the route of self-publishing.  But not the “vanity” way.  I hired a proper, experienced editor in June 2013 and, after several back-and-forths, by the end of April 2014 we had a final novel.

And that novel finally got published on 3 May 2014!

Liam H. Dooley is an Irish-American author living in Asia and Europe. He has a passion for history and traveling. Most of his time is spent touring the world, visiting museums, iconic buildings, monuments, and grand squares in search of knowledge and inspiration. As a child and university student he played the cello while studying international relations, and when he is not researching and writing novels or planning trips he immerses himself in current events and international affairs. You may learn more about Liam H. Dooley at his official web site: www.liamhdooley.com
View all posts by Liam H Dooley →
This entry was posted in Uncategorized and tagged Creative writing, editing, eureka moment, publishing, Self-Publishing. Bookmark the permalink.